Pediatricians recommend that children remain in the most restrictive car seat available for as long as possible. With these facts in mind, a booster seat is an important investment for parents to make. In this Mifold Booster Seat review, we will compare the Mifold Booster seat with a few similar seats that are on the market.

Years ago, when children outgrew their five-point harness car seats they simply transitioned to regular seatbelts. Today, we have more stringent safety laws.

What Is the Mifold Booster Seat?

The Mifold Booster Seat is a booster seat that folds up, making it ten times smaller than the average booster seat. The creators invented it because they noticed that their own children often had to ride in cars without a booster seat: for example, when they were riding in cars with friends’ parents who didn’t have an extra booster seat on hand.

They saw a need for a compact, safe, and portable booster seat that could be used for carpooling, taxi rides, and everyday use. 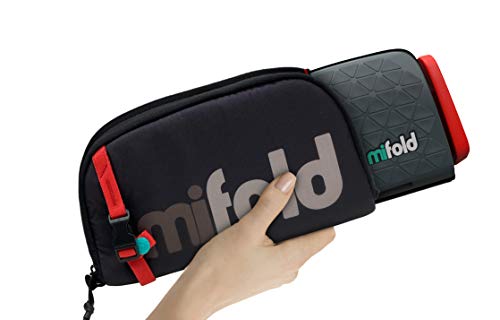 We picked a few similar products available on the market to see how they compare.

Let’s take a quick look at the Mifold models.

According to Mifold Booster Seat reviews by parents, this seat is not very comfortable. It contains less cushioning than most booster seats, most likely because adding extra cushioning would take away from its portability and convenience.

Children are able to tolerate it for shorter rides, and that is what it is designed for.

The ability to fold this car seat to a size smaller than a water bottle makes this car seat especially convenient for busy parents. It can easily be stored in a backpack or even a purse.

In some Mifold Booster Seat reviews, parents mentioned that they bought several of these car seats to keep on hand for when their children have friends along with them. It is slender enough that three of them can fit side by side on a bench seat, even in a compact car.

One thing some parents complain about in Mifold Booster Seat reviews is that it is difficult for children, especially the younger ones, to buckle themselves in. An adult must often assist them.

However, the entire process of setting up the booster seat and strapping the child in takes only about 30 seconds, which is not a major inconvenience. Some parents have also mentioned that it can be difficult to thread the seatbelt into the repositioning clip.

This seat is made of aircraft-grade aluminum and Dupont Delrin 100ST, so it is very durable. It differs from other booster seats because, instead of lifting the child up so that the lap belt can fit them securely, it has a clip that holds the seatbelt down in the correct position.

It has side panels that can be adjusted to support children of various sizes, from the 40-pound, 40-inch tall preschooler to the 100 pounds, 57-inch tall middle schooler.

One thing older kids like about it is that it does not look like a traditional booster seat. It sits flat on the seat, creating the appearance and feel of sitting on a plain seat. 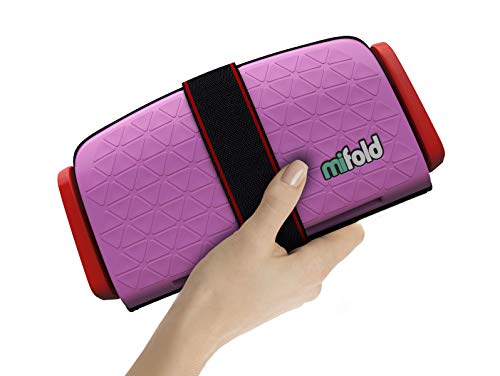 It is rated a “Best Bet” booster by the Insurance Institute for Highway Safety. It is engineered and crash tested to meet or exceed US standards, is Side Impact Tested, and uses EPS energy-absorbing foam for additional safety.

Unlike in the Mifold Booster Seat reviews, parents say that this booster seat is comfortable for children. It is a little wider than many other similar booster seats. (The dimensions are 10.5” D x 16.75” W x 25.4” H.)

It also has lots of padding. The high back position has a comfortable headrest and full back support. It also has adequate leg support.

While this seat cannot be folded up and packed in a backpack, parents do say that it is lightweight and easy to install. It must be assembled after being purchased, but parents say it is easy to assemble.

It also stays in one piece when being transferred in and out of a car.

This seat uses the LATCH system, which many other booster seats do not have. The benefit of using the LATCH system on a booster seat is that it stays in place more securely, preventing it from moving around in the car when the child is not seated in it.

Some parents say it is also easier for the child to buckle their seatbelt when the seat is secured with the LATCH system because the seat stays still.

The LATCH system uses a hook system rather than a push on system, and it can be somewhat difficult to secure. However, using the LATCH system with this seat is optional if you don’t like it.

The seat has two cup holders and a special compartment where children can store small toys and other treasures. Some parents reported that their children found it hard to pull out the drawer when they were sitting in the seat, which led to frustration. One of the cup holders is stored under the seat and needs to be folded out for use.

The headrest, which is used only in the highback position, has six height positions. It comes in five different color patterns.

It is rated a “Best Bet” booster by the Insurance Institute for Highway Safety. It exceeds safety standards and was crash tested at energy levels that were twice the federal crash test standard. It has been side impact tested and has also been tested for integrity and durability at high and low temperatures such as cars are subject to.

Reviews of this booster differ from Mifold Booster Seat reviews, as parents say this seat is very comfortable. It has a contoured pad that can easily be removed and cleaned in a washing machine.

The armrests are padded as well. It is a little wider than other backless seats, which means that it may be more comfortable for bigger kids.

This seat is easy to install and comes with a belt-positioning clip to make sure that the belt fits the child properly. Parents like that the armrests can easily be wiped down and that the seat padding can be either wiped down or removed for laundering.

The seat is lightweight and can easily be transferred in and out of a car. However, it is bulky and not nearly as easy to carry around as the Mifold.

Children love the fact that this seat comes in lots of design choices. Parent reviewers loved that it exceeds safety standards and was crash tested at energy levels that were twice the federal crash test standard.

This seat comes with a 90-day limited warranty. 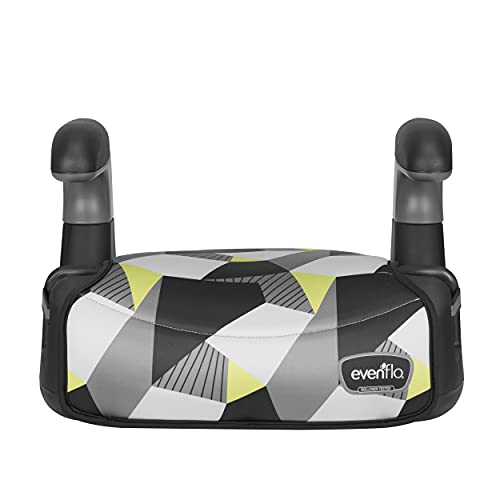 This booster can be used by children who are between 40 and 100 pounds and between 40 and 67 inches tall. It is rated a “Best Bet” booster by the Insurance Institute for Highway Safety.

It was invented by a mother from North Ireland who was frustrated with the inconvenience of having to carry traditional booster seats while traveling.

Reviews of this booster differ from Mifold Booster Seat reviews because most children find this seat to be very comfortable. The memory foam filling makes it especially cushiony.

An included shoulder belt positioner is optional for children who are irritated by the seat belt rubbing against their shoulders.

One thing parents loved was the convenience of being able to fold up the seat for travel or storage. This seat is similarly easy to travel with.

However, instead of folding up, it deflates. It weighs about a pound or less, making it ideal for families who want to travel light.

To install, you will need to inflate it, put it on the seat, and thread the lap belt through the side buckles on the BubbleBum. It is narrow enough to fit in most cars as well as in airplane seats.

When parents are ready to remove the seat and pack it up, they just deflate it by rolling it and flattening it. It is not as simple as the Mifold, but it is more comfortable.

While some users worried at first about how durable and safe a booster seat filled with air would be, the BubbleBum is more similar to an inflatable life jacket than to an inflatable pool toy.

The thick outer shell is made of heavy-duty plastic and memory foam. Even if it becomes deflated somehow, it is still sturdy enough to pass crash tests.

Some parents have said that their children felt like it would tip over at first, but eventually, the children got used to the different style of the BubbleBum seat.

It comes in various color combinations, including black and silver, a Union Jack, an American flag pattern, a pink zigzag pattern, and a green shamrock pattern. The seats come with their own carrying bags.

The BubbleBum comes with a one-year limited warranty. 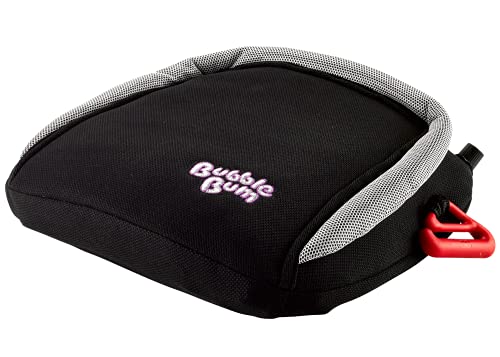 In our research for this article, we found that many parents who wrote Mifold Booster Seat reviews had mixed feelings about the product.

The one thing that Mifold Booster Seat reviewers liked was that it folds up into such a small size, making it very easy to transport and store and perfect for “emergency” rides in a relative’s car when no booster seat is available.

Yet it does not contain much cushioning and therefore is not very comfortable for children to ride in. It could be something to be purchased for use in a pinch, such as to use on short taxi rides or for when you have an extra child on board.

Overall, we would rate the Mifold Booster Seat a 4 out of 5. This is a great seat to have around. It offers you more options for staying in compliance with local laws and yet is very convenient.

For parents who would rather opt for a traditional, yet lightweight, booster, either the Graco Affix Youth Booster Seat or the Evenflo Amp Performance No Back Booster would be great options.

Parents should be sure to do their research in order to decide which booster seat is the best choice for their family. Be sure to follow your local car seat laws as well; and remember that experts recommend that children remain in their five-point harness car seats for as long as possible until they exceed the height and weight limits.

Best 3 and 1 Car Seat for Long-time Use!

Graco 4Ever Vs Extend2Fit: Which One Wins?

As a participant in the Amazon Services LLC Associates Program, this site may earn from qualifying purchases. We may also earn commissions on purchases from other retail websites.