With new research proving the need to keep children in child safety seats for longer, and new laws requiring the seats, buying a car seat for a child is no longer as simple as just buying the first one you see at the store. Parents expect more from their car seats now. They often prefer seats that will last for years, growing and adjusting with their child, so that they don’t have to go back and buy a whole new seat every six months when their child’s needs change. The Graco 4Ever and Extend2Fit child safety seats are two popular models, but which one is best? In this article, we will help you decide the Graco 4Ever vs Extend2Fit debate for yourself.

Graco 4Ever vs Extend2Fit — What Are They?

First, we’d like to look at the technical specifications of the Graco 4Ever vs Extend2Fit.

In both the Graco4Ever and the Extend2Fit, children can use the forward facing setting if they are between 22 and 65 pounds, and less than 49 inches tall.

The Extend2Fit seat is 20 inches wide, including the cup holders. It is 30 inches tall and weighs 18.5 pounds.

The comparison of safety features on the Graco 4ever vs Extend2Fit seats is equal. They both have Safety Surround Side Impact Protection, which means that the child’s head is protected from all angles. They both have EPS — energy-absorbing foam that protects the child by absorbing the impact in a crash as much as possible. They both have steel frames for durability and strength. Graco puts their car seats through testing procedures that include frontal, rear and side impact testing, roll testing, and extreme interior temperature testing.

Both seats are very similar in price. The price also varies depending on color pattern.

The Graco 4Ever car seat is a seat that is designed to grow with a child from the time they are a newborn until the time that they no longer need a car seat at all. It includes two removable cup holders so that when a child is old enough to have snacks and drinks in the car, they have a nice place to set them. Safety features include a steel-reinforced frame, side impact technology, and energy-absorbing foam.

Most users agree that the Graco4Ever seat is easy to install, with clearly labeled and color-coded belt paths to take away the guesswork. It has only one set of LATCH straps, which have to be used in both the front-facing and rear-facing positions. When switching positions you’ll have to move them, which is not very difficult to do. The LATCH system is easy to install, and you’ll hear an audible click when it is installed correctly. The rear-facing position makes use of a bubble indicator so you can be sure that it is level when you install it. Users said that the hardest part of this seat’s installation process was tightening the seatbelt in the rear-facing position.

Converting the seat from one position to another is also simple, but needs to be done outside of the car for best results. Transitioning from rear-facing to forward-facing involves moving the LATCH connectors to the forward-facing position. Converting it to a booster position won’t require removing the harness, but simply tucking it into a special compartment on the seat. Eventually, when a child is ready for a backless booster, you remove the back of the seat.

While this car seat is durable and has lots of great features, it may not be the most comfortable seat. Some parents pointed out that the rear-facing position doesn’t recline as much as a regular infant seat. If the seat is installed in a sedan, there may be even less room to recline in. Infants who like to be in the reclining position, or who need to recline while sleeping because of issues such as GERD, might not be comfortable. The back of the seat is also hard, so once children outgrow the infant insert they might be uncomfortable, especially on longer drives. Some parents complained that their children sweated a lot while riding in this car seat. As far as being aesthetically pleasing, this car seat comes in a variety of patterns, so parents can choose the one that they or their child like best. 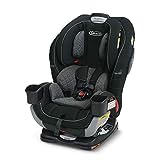 The Extend 2Fit car seat is similar to the Graco 4Ever in many ways. It is a convertible car seat that grows with a child, though it does not have the Graco 4Ever’s backless booster seat feature. It also has two removable cup holders. Like the Graco 4Ever, its safety features include a steel-reinforced frame, side impact technology, and energy-absorbing foam.

Users found that installing this car seat using the LATCH system is fairly easy as it just snaps into the vehicle’s LATCH anchors. The seatbelt method is more difficult, especially in the rear-facing position. When comparing the Graco 4Ever vs Extend2Fit, it seems that the Extend2Fit’s seatbelt path is smaller and a little harder to weave a belt through. Transitioning the seat to a booster is just as easy as the Graco 4Ever’s transition, involving tucking the harness into a special compartment.

In the comparison between Graco 4Ever vs Extend2Fit, the Graco 4Ever has an edge in one area because it includes a backless booster seat option. This means that children can continue riding in the seat after they’ve outgrown a high-back booster seat. However, the Extend2Fit has a different edge because of its leg extender for the rear-facing mode. Because children are now expected to ride rear-facing when they are older and taller than previous generations, they need a little more leg room. Newborns and small babies won’t need the leg extender. Once children’s feet begin to hang over the edge of the seat, they can make use of the leg extender’s three positions. By the time they outgrow the leg extender, they’ll be ready to sit facing forward.

When it comes to the Graco 4Ever vs Extend2Fit discussion, many parents’ favorite aspect of the Extend2Fit seat is the extra ten pounds allowance for sitting in the rear-facing position. Parents also love the six reclining position options for the rear-facing seat, offering extra comfort for children. Many parents pointed out the no-rethread harness design that allows you to adjust the height of the harness and headrest without having to rethread it. One thing that parents complained about was the removable seat cover. It can be difficult to remove, and just as difficult to reattach. The fact that it can be removed at all, and then machine washed, is still a plus. The Extend2Fit has more padding than the Graco 4Ever, which is a plus for a child’s comfort but can also make them hot. Many parents also wished that this seat was less bulky.

It is difficult to compare the Graco 4Ever vs Extend2fit, when they are similar in so many ways. They are both convertible car seats with easy-to-install LATCH systems, six reclining options in the rear-facing position, no-rethread harnesses, and adjustable headrests. While the Graco 4Ever car seat converts to a backless booster seat for after a child has outgrown the high-back booster, the Extend2Fit offers leg extension and is good for an extra ten pounds in the rear-facing position. Price-wise, the two seats are very similar. It may come down to a parent’s personal preferences. If parents really want their child to ride in a rear-facing seat for as long as possible, the Extend2Fit is the obvious choice. Keep in mind that there is also a height limit for the car seat’s rear-facing position, so if your child is tall he may very likely outgrow the rear-facing position before he hits fifty pounds, anyway.

Parents should also take into consideration the fact that car seats have expiration dates. In the case of both the Graco 4Ever car seat and the Extend2Fit car seat, the expiration date is ten years after the seat is manufactured. This means if you have a newborn, by the time she is tall enough and heavy enough for a backless booster seat, your convertible seat may be close to expiring — or newer and even safer versions of backless booster seats may be on the market to replace your convertible seat. If this is the case, going with the Extend2Fit and forgoing Graco 4Ever’s backless booster seat option may be a good choice. On the other hand, if your child is three or four years old and is very close to outgrowing the height requirement for the Extend2Fit’s rear-facing option, going with the Graco 4Ever may be the more sensible choice.

There is definitely a lot to think about when it comes to choosing between the Graco 4Ever vs Extend2Fit. Take your time, do your research, and choose the seat that will be the perfect fit for your family. Your child’s safety is always the top priority.

Best 3 and 1 Car Seat for Long-time Use!

As a participant in the Amazon Services LLC Associates Program, this site may earn from qualifying purchases. We may also earn commissions on purchases from other retail websites.